Short Play Festival 2019: “What Happened to the American Dream?”

As part of ArtsQuest, internationally acclaimed artist Dick Termes was on campus last week to talk about his one-of-a-kind spherical paintings, known as Termespheres®. Several were on display at the Gannon Gallery in advance of his visit.

Termes gave BSC one of his Termespheres®, entitled “Universal Campus,” and it now hangs in the BSC Library’s Commons area.  Come & see it!

“Each Termesphere® is a revolving three-dimensional space/time exploration of an entirely closed universe, meaning that what you see, rotating in front of you, is one complete world or environment. What you are seeing when you look at a Termesphere® is an optical illusion – an inside-out view of the total physical world around you on the outside surface of a hanging, rotating sphere.”

For more information about Dick Termes and his work, go to https://termespheres.com/

Yesterday’s W.A.N.D. (The Walk Across North Dakota) ArtsQuest event in the Library Commons was great fun!

Jeremy Bold and Gwen Hoberg, two of the walkers, gave a great presentation.  We purchased a copy of their book, A Walk Across North Dakota, for the Library collection; once it is cataloged, you can check it out! 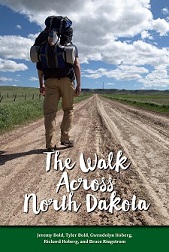 What: “The Walk Across North Dakota” – ArtsQuest book event

The Walk Across North Dakota was written by five North Dakotans who grew up in Bismarck — Jeremy Bold, Tyler Bold, Gwendolyn Hoberg, Richard Hoberg, and Bruce Ringstrom.  Over two summers, they walked from Beach to Fargo to test their physical limits and explore what it means to be from North Dakota.  Gwen Hoberg and Jeremy Bold, will discuss their adventure and show video shot during the journey in a presentation at the BSC Library.  There will also be a book signing.

Straight from London …. The Paper Birds Theatre Company will be doing workshops and performing as part of BSC’s ArtsQuest celebration.

Performances of In a Thousand Pieces, an original piece about sex trafficking in the UK, will be held at the Belle Mehus Auditorium at 7:30 p.m. on Tuesday, April 23, and Wednesday, April 24.  Admission is free.

I had the privilege of seeing the Paper Birds perform this piece in Prague in 2009 at the Prague Fringe Festival.  It was memorable, moving, and powerful.  Don’t miss it!

The place to be was all around the BSC Library for today’s ArtsQuest Campus Crawl.  Raku was being fired west of the library from 10 a.m. to 5 p.m., students unveiled the latest Figments of Imagination literary journal and did a reading over the noon hour on the library courtyard, and  the ever-popular tie-dye event took place from noon to 3 p.m. between the Library and Werner Hall. 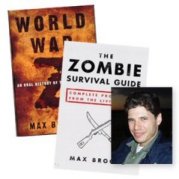 Author Max Brooks, son of Mel Brooks and Anne Bancroft, is completely dedicated to raising awareness on the issue of Zombie survival. His 2007 New York Times bestseller, World War Z: An Oral History of the Zombie War, soon to be made into a major motion picture starring Brad Pitt, tells the story of the world’s desperate battle against the zombie threat with a series of first-person accounts “as told to the author” by various characters around the world. Publishers Weekly called the novel “surprisingly hard to put down.” Brooks’ latest release, The Zombie Survival Guide: Recorded Attacks, is the graphic novel that fans demanded.

Brooks worked for the BBC in Great Britain and East Africa and is a former writer for Saturday Night Live. He lives in New York City with his wife, Michelle, and their miniature dachshund, Maizey.

Brooks will be at BSC on Wednesday, April 25, at noon to lead a “Dead Man Writing Class.”  This will be a bring-your-own-lunch writing discussion in the Prairie Room, Student Union.  This event is free and open to the public and is sponsored by BSC’s Visiting Writers Series and ArtsQuest.

At 7:30 in the evening, Brooks will be at the Belle Mehus Auditorium presenting 10 Lessons to Survive a Zombie Attack.

Check out these books by Max Brooks from the BSC Library:

Despite loving the movie Shaun of the Dead and tuning into every episode of AMC’s The Walking Dead, I haven’t thought of myself as being part of the wave of “zombie mania” that seems to have taken hold of so many.  Well … time to rethink.

I recently read World War Z: an Oral History of the Zombie War by Max Brooks. I confess that I read it out of a sense of obligation (it was one of the top three picks for the 2013 Campus Read and as a committee member, I wanted to do my duty) vs. a real interest in the book. Oh my goodness! What a great read! There’s a reason it’s been a bestseller and a reason you shouldn’t judge a book by its cover (or its title or its subject).

World War Z grabbed my attention from the first page. Written in the style of an investigative report through a series of  first-person interviews with survivors of the Zombie War, it chronicles an epic battle that came close to wiping out the world as we know it.

Read this book! Even if you don’t care about zombies.

P.S.  Author Max Brooks (son of Mel Brooks and Anne Bancroft) will be at the Belle Mehus on April 25 as part of BSC’s ArtsQuest celebration and the BSC Visiting Writers Series.  He will also be doing a “Dead Man Writing Class” (a bring-your-own-lunch writing discussion) at noon that day in BSC’s Student Union Building, Prairie Room.  Both events are free and open to the public.  Don’t miss out!

Author, journalist, and North Dakota native Chuck Klosterman will be on campus on April 11.  The free public presentation, “An Evening with Chuck Klosterman,” will begin at 7:30 p.m. (Central Time) at the Sidney J. Lee Auditorium.  Klosterman’s visit is sponsored by BSC ArtsQuest 2012 and Read North Dakota.

Klosterman is the author of several books, including the novel Downtown Owl (2008), which was one of the top three contenders for the 2012-13 BSC Campus Read.  Ultimately, the committee chose The Hunger Games by Suzanne Collins over Downtown Owl, but not without some regret.  There was great affection for Klosterman’s book, which is set in the fictional town of Owl, North Dakota, and is both laugh out loud funny and poignant.  The Boston Globe called it “an astonishingly moving book, a minor masterpiece in the genre we might call small-town quirkiana.”  I’m so glad I read it.

Klosterman’s other non-fiction books include: Fargo Rock City: a Heavy Metal Odyssey in Rural North Dakota (2001); Sex, Drugs, and Cocoa Puffs: a Low Culture Manifesto (2004); Killing Yourself to Live: 85% of a True Story (2005); Chuck Klosterman IV: a Decade of Curious People and Dangerous Ideas (2006); and Eating the Dinosaur (2009). His second novel, The Visible Man, came out in 2011.

We have all of these books at the BSC Library.  Check them out!

ArtsQuest is BSC’s annual celebration of the performing, visual, and literary arts and BSC student talent.